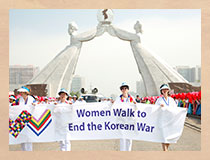 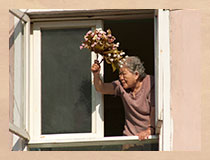 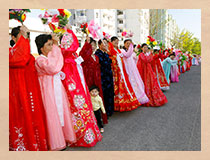 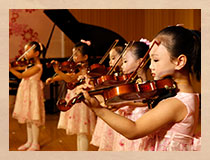 In Crossings, a group of international women peacemakers sets out on a risky journey across the demilitarized zone between North and South Korea, calling for an end to a 70-year war that has divided the Korean peninsula and its people. Comprised of Nobel Peace Laureates and renowned activists like Gloria Steinem and Christine Ahn, the intrepid team faces daunting logistical and political challenges as they forge a path with their Korean sisters toward peace and reconciliation.

In CROSSINGS, a group of international women peacemakers sets out on a risky journey across the demilitarized zone between North and South Korea, calling for an end to a 70-year war that has divided the Korean peninsula and its people. The groundbreaking mission of Women Cross DMZ is captured in an intimate cinema vérité style, framed with historic newsreels of the Korean War and punctuated with dramatic contemporary news coverage.

Although the Korean War was halted by armistice in 1953, the warring parties never signed a peace treaty. Nearly 70 years later, the threat of renewed fighting looms as American troops continue to occupy the Korean peninsula, North and South Korea remain adversaries, and millions of Koreans are tragically separated from their family members.

From threats of annihilation to promises of peace, the rollercoaster ride of U.S.-North Korea relations provides key moments of drama throughout the story. But the film’s protagonists are thirty women activists from Asia, Africa, Europe, North and South America who dare to tread forbidden territory to draw global attention to the unresolved war and demand a seat at the table in bringing about peace. Korean American Christine Ahn rallies the group, including feminist pioneer Gloria Steinem, Nobel Peace Laureates Leymah Gbowee and Mairead Maguire, former Army Colonel Ann Wright, and Code Pink co-founder Medea Benjamin.

The intrepid team faces daunting logistical and political hurdles as they make their way toward the DMZ. When their crossing becomes precarious, the women debate how to proceed, forging deep respect for their differences and greater unity every step of the way. With a last minute reprieve from North and South Korean militaries, the group ultimately crosses the DMZ, to be met by protestors who accuse them of being propaganda tools for North Korea. But their supporters outnumber their critics, as their South Korean counterparts join them for a peace walk along the border.

The heady momentum of their victorious crossing will soon collide with dramatic events: a change of course when newly elected South Korean President Moon Jae-In holds talks with North Korean leader Kim Jong Un inside the DMZ; a year of saber-rattling between Donald Trump and Kim Jong Un, followed by an unprecedented summit aimed at denuclearization of the Korean peninsula and an end to the Korean War. When talks fail at their follow up meeting, the promise of peace is shattered once again.

Undeterred, Women Cross DMZ expands their global campaign to educate and advocate for a peace treaty. Thousands join worldwide as they forge a path with their Korean sisters toward peace and reconciliation.